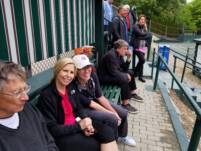 Comunitas (formerly EMARC) is a program for special needs athletes. The tennis segment is run by Alicia Hintlian to introduce and coach special athletes. Alicia is supported by a group of senior mentors who do everything from coaching the kids to picking up balls and putting them back in the shopping carts. In addition, there are a group of high school kids who do most of the actual coaching. This is a great opportunity for the kids to do community service and to see what those less fortunate have to go through. They also relate much better to the athletes, they watch the same movies, play the same video games, and watch the same TV programs. In the winter, the program is held at the Woburn Racquet Club, in the summer at the Packer/Ellis courts.

The athletes have various disabilities, so there are many different methods of working with them. It’s a challenge to the figure out what works, and accomodate the athlete. Some of them can rally the ball, and some have to be fed balls from as close as 3 feet away.

The athletes are incredible in their own special ways. If you give Hubert your birthday, he will tell you what day of the week you were born on. Leia gets there 15 minutes early so she doesn’t miss a minute of tennis time. She also emails me all the time to make sure I am ok. Tommy says “thank you” whenever you do anything to help him. Jeremiah is ambidextrous and can hit a rocket forehand from either side. He’s knocked me over a couple of times, so I smartly pass him on to other instructors. There are Big Matt and Little Matt who competed in Special Olympics in 2019. Kevin likes to stand at the net and have long rallies. I think his current record is over 500 hits. He has worn out more than one instructor. Sai has cerebral palsy and has trouble holding the racket. Bob Sutherland usually helps him hold the racket and Howard Yao feeds balls. David likes to run away, but luckily Hillary Turkewitz is able to track him down. David’s brothers Nate and Sam used to try and kill everything, but now like to rally the ball with the high school kids. Pranav used to think he was David Ortiz, but with several years of coaching can now rally the ball. Luca runs after everything, and usually gets the ball back.

Being involved in this program is incredibly rewarding, and we are always looking for more volunteers.

The WTA made a donation in 2019 to help defray the cost of court rentals.