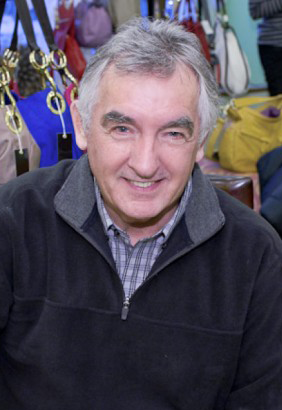 The courts were well maintained until Don Ellis’s  untimely passing. Vinnie Palumbo who was appointed supervisor did a great job of supervising but had no control over maintenance. Unfortunately, without Don’s attention the courts once again suffered. Eric Hamilton got a bunch of us together and we pressed the Rec Dept. to get better maintenance. After a session with the selectmen, it was decided to appoint Glen Doyle to the position of court supervisor and maintenance manager. The WTA with a major contribution from Fred and Alicia Hintlian purchased a second hand golf cart to assist Glen in his endeavors. Since then the courts have been restored to their former glory.
Glen Doyle has been supervising and maintaining the courts for a number of years. The WTA and the Rec Dept sponsored Glen to attend a course on clay court management at the John McEnroe Tennis Center on Long Island. Glen took the course and brought the lessons back to improve our clays. He has worked hard over the years through floods, droughts, pandemics, broken watering systems, and crabby players (I being one of them) He has tirelessly worked to repair the courts when needed, cobbled together the old broken benches when needed, painted anywhere he could and just made the environment so much more pleasant.

Glen has been been hiring summer help (the Welsh kids in particular) who have been so helpful to the players. They have all been incredibly courteous and generous in doing extra sweeping, doling out first aid when necessary, keeping the entire court environment picked up and many other things. If there is a loose nail on one of the tapes, the staff is quick to respond and set it back in place. (Having tripped over several nails over the years, this is greatly appreciated.) They also help out watering the plants so our facility always looks first class.

Glen is a man of many talents. Besides his handy man capabilities, he is an accomplished musician, has performed and taught in the theatre (he taught my kids in the Summer Cooperative Theatre), a soccer ref, a player, and who knows what else. He also married a lovely woman named Joanne a few years back who has kept him in line.

We are blessed to have Glen who has followed in the footsteps of Whit, Don, and Vinnie. We have the finest public clay court facility in New England, thanks so much to his efforts.